It was about that time of the year again, figuring out a way to get to the Philippines all the while getting to see other parts of the world on my way there.  Last year I got to walk around Tokyo all night til daybreak.  I wanted to do it again, but the timing constraints and available flights just wasn't practical enough for me.   Not to be discouraged, I went to the next city on my list and booked my flight to Manila with Cathay Pacific via Hong Kong with the longest possible layover in mind.  Sure enough, I found it thanks to Skiplagged.  Leaving Newark at 01:10 (a flight that i had almost missed) and arriving in Hong Kong 05:30 the following morning with a connecting flight to Manila scheduled for 20:30 that evening.  As nice as Chek Lap Kok's international transit lounge is, there's just no way I'm spending my entire layover there.

Last year, when I visited Tokyo I think I might have fell victim to over-researching and worrying about the language barrier that everything I had planned to do was premeditated.  All the way down to the thoroughfares I planned to stick to, it felt a bit clinical and too safe.  This time I was a bit wiser.  With a daytime layover in order, it meant I could catch blue-hour and start my day from there.  The only thing I researched was mass-transit and perhaps a place to have lunch.  The rest of my day was as the crow flies.  Hong Kong's MRT, very much like Tokyo's is second to none.  I gave myself til 17:00 to make it back to the airport with time to spare and as day was starting to break with blue hour eroding, I had to hit the ground running.  First stop, The Peak.

If you are unfamiliar with the geography of Hong Kong, Victoria Peak is the tallest point in elevation on Hong Kong Island.  During the Victorian Era of British Colonial rule, the British built a network of sprawling roads along the mountainside and cable-tram that will bring people back and forth from Central to the Peak.  At the terminus of the Peak Tram lies the Galleria, which is effectively a shopping mall with a viewing platform to which i had very little interest in spending time at.  It was closed at the time, since I took the first tram departing from Central anyway.  Following a tip from another man with a camera,t to get the best view of Central I walked west along Lugard Road, which is really more of a trail than an actual road. All the "roads" of Victoria Peak follow the contours of the mountainside and they are dappled with foliage.  It's a perfect place for a morning run.  About 10 minutes in to my walk along Lugard Road, there was a clearing in the trees and I found the shot I was looking for.

It's exactly how I imagined it would be.  With the sun rising over the Peak and the lingering moisture in the air from the previous evening acting as a natural diffuser, I knew the shot I had in mind had to be in black and white.  Mountain tops became squiggly lines disappearing into the infinite gray with nothing but angular lines of distant buildings breaking the monotony.  Needless to say I was quite pleased with myself on this one.  My glee was short-lived though because I had glanced at my phone with 34% charge remaining and in my haste to leave the night before because I didn't realize I was flying out that night, I had forgotten to pack certain items that were vital to my kit.  One of which being was a USB cable.  Nice one, 'nato.  By this time it's barely 0930 so I actually had some time to rest since I assumed that stores wouldn't be open til 10 so I thought it best to head back down to Central for some breakfast.  Made my way to Barker Road Station which is the second to last stop on the Peak Tram.  Calling for a tram is very much like pushing the button of an elevator at the door.  There are only two buttons so it's pretty hard to be confused by what button does what.  The tram arrives and the conductor stops me short in my tracks. "Up or down?" he says.  "Down," I reply.  Gesturing stop with his hands, he says "wait here."  Confused, i said "...okay."  To make sense of this exchange, Barker Road Station is more of a novelty and a bit of a redundancy since the terminus is literally only several yards away.  "What difference does it make exactly if I got on one stop early?" I thought to myself as I watch the tram depart and make its final stop only to head back towards my direction.  Three minutes later it arrives, the conductor opens the door and greets me, the only passenger standing on the platform, with a cheerful "Good morning."  "Hello, again!" as I flash him my oyster card.  An awkward exchange that could have been avoided merely moments ago, but I've digressed.  Something to note of the Peak Tram Line.  It. is. steep.  San Fransiscans will scoff, but i insist. Using what little charge I had remaining I searched for the closest coffee spot that was open that had the best chance of having free Wi-Fi.  Sure enough to my grief, it was a Starbucks.  Funny story about this Starbucks.  It sits atop a very old set of stairs fixed with gas lamps.  These steps were vaguely familiar.  I had the seen them before on a pokey little show about Photography equipment on YouTube, DigitalRevTV.  They are the Duddell Street steps and have been around since the late 19th century.  To get even more meta, the steps were featured in the same episode of which they reviewed the first generation of the current camera that I'm using, the Olympus OM-D. I think they were comparing the existence of the steps in modern day Hong Kong to the styling of Olympus' then brand new yet old-looking camera full of leading-edge tech of the day.  At that moment, like the people on those steps, I was very much a giddy tourist.

By this time it's already well past 10 and shops are starting to open so I thought it best to start picking up things I had left behind back in Jersey.  Found myself walking along Stanley Street and stopped in at a place called Chung Pui Photo Supply.  There were no signs but a visible tell were all the cameras in the window.  What I needed was a QR plate for my tripod.  Fortunately, they were a Peak Design dealer.  Got myself a Pro-Plate for $220HKD which is $28USD, $1.50 cheaper than what B&H would sell it for, score. 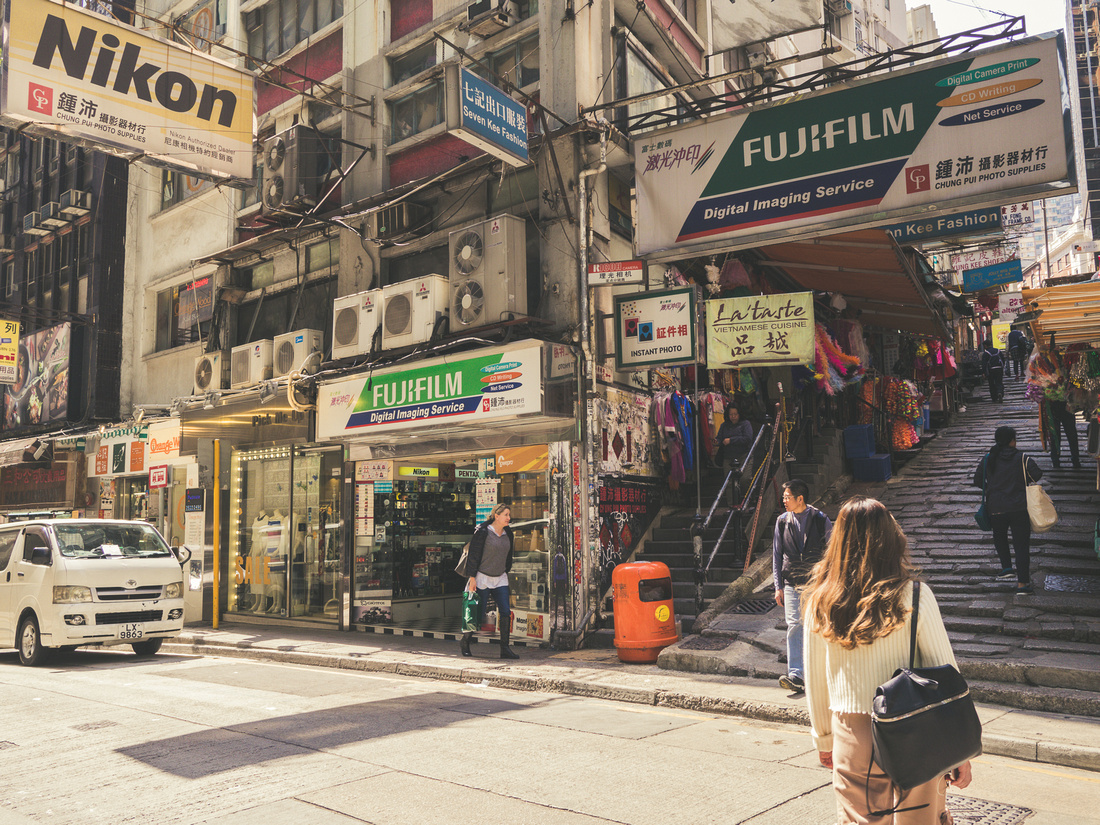 The only truly scheduled stop I had during my short visit to Hong Kong was try out some genuine fish n chips.  A bit odd, considering Hong Kong is in Asia and is almost a generation removed from being a British Colony, but it's something my dad said I had to try.  The place that caught my eye on Google was Hooked , located on Caine Road in the Mid-Levels.  The cool thing about Hooked is that its owned and operated by a Kiwi.  He imports his fish straight from New Zealand.  The best tasting catch? Hoki.  I had the lunch set. You get one fillet on the menu, a scoop of chips, and a chicken nugget with your choice of sauce.  All for $65HKD. $30 more and you get yourself nice cold one. 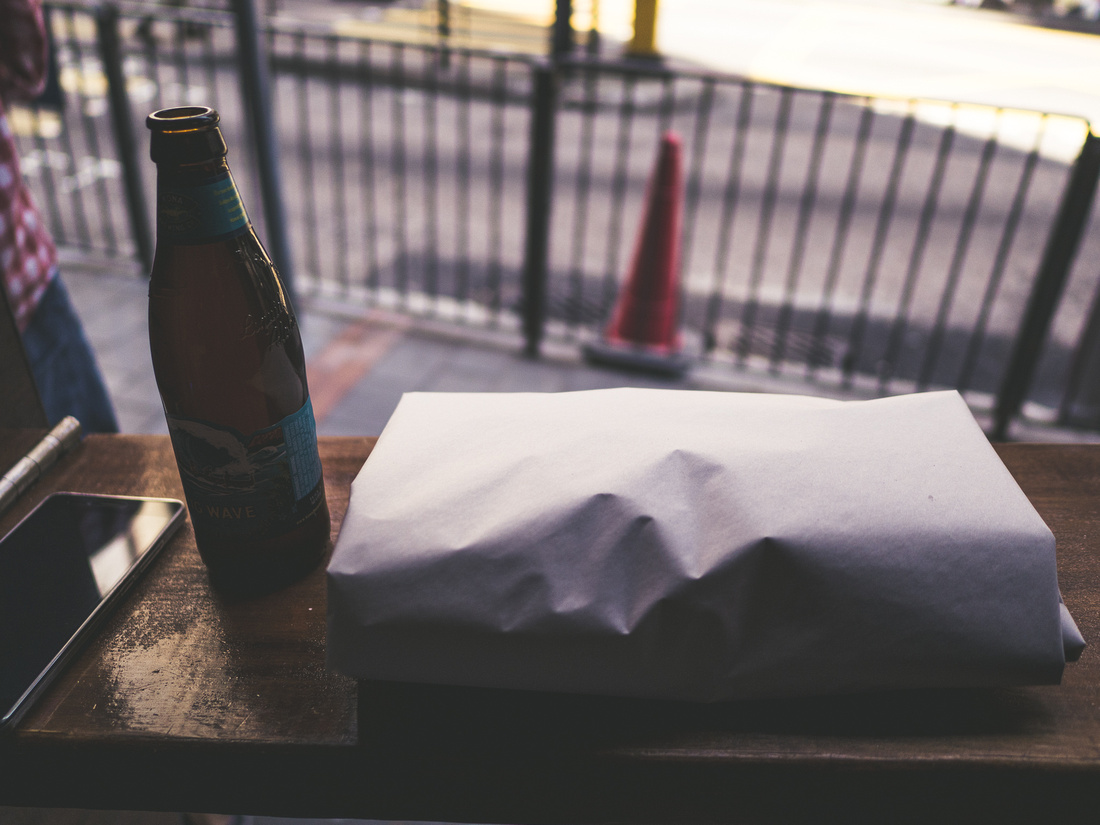 My dad used to visit Hong Kong when he was in his early 20's and he'd go on and on about the cameras and guitars he could find on Stanley and how Fish n Chips isn't real unless its served to you wrapped in paper.  So from second-hand knowledge, this doesn't get more Fish n Chips in terms of authenticity. 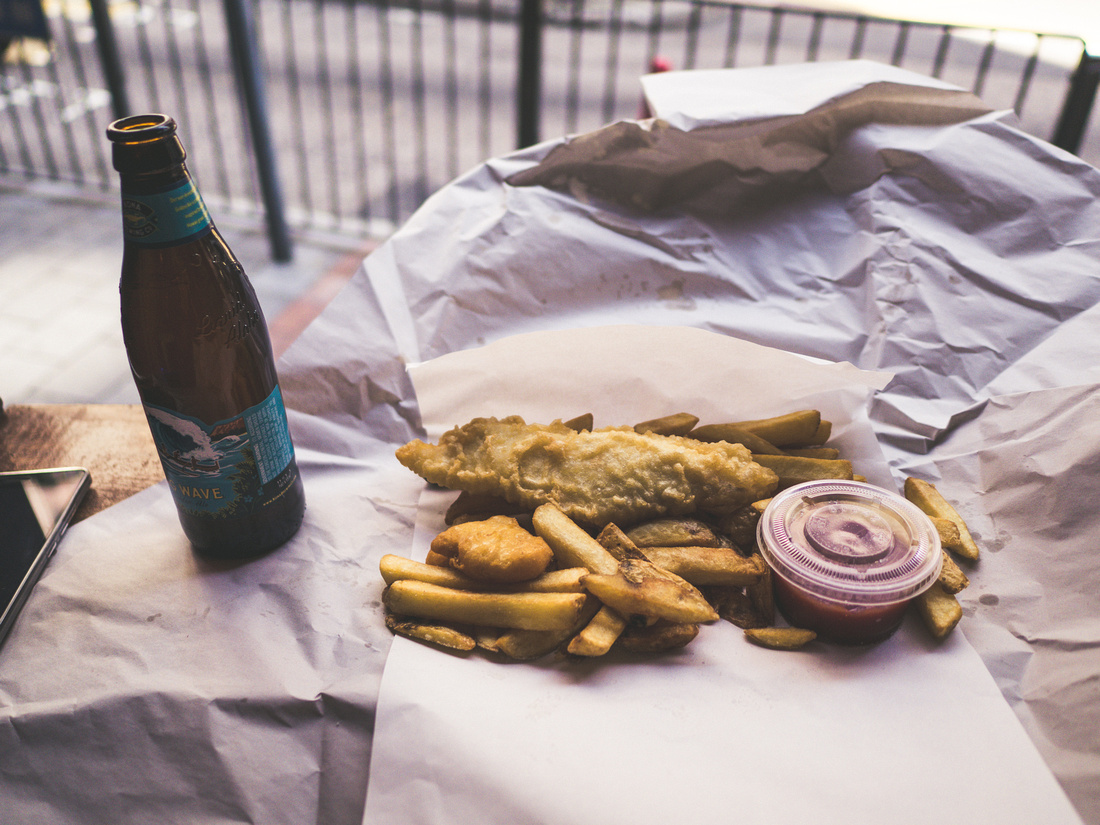 Appetite satisfied, and with 4 hours to go before my self-mandated return back to the airport I continued on with the photo walk.  The objective was to take the longest way possible to Pier 7, home of the Star Ferry.  It's the cheapest and most scenic way to cross Kowloon Bay into Kowloon and the rest of Mainland China.  But along the way, there were scenes that had caught my eye. 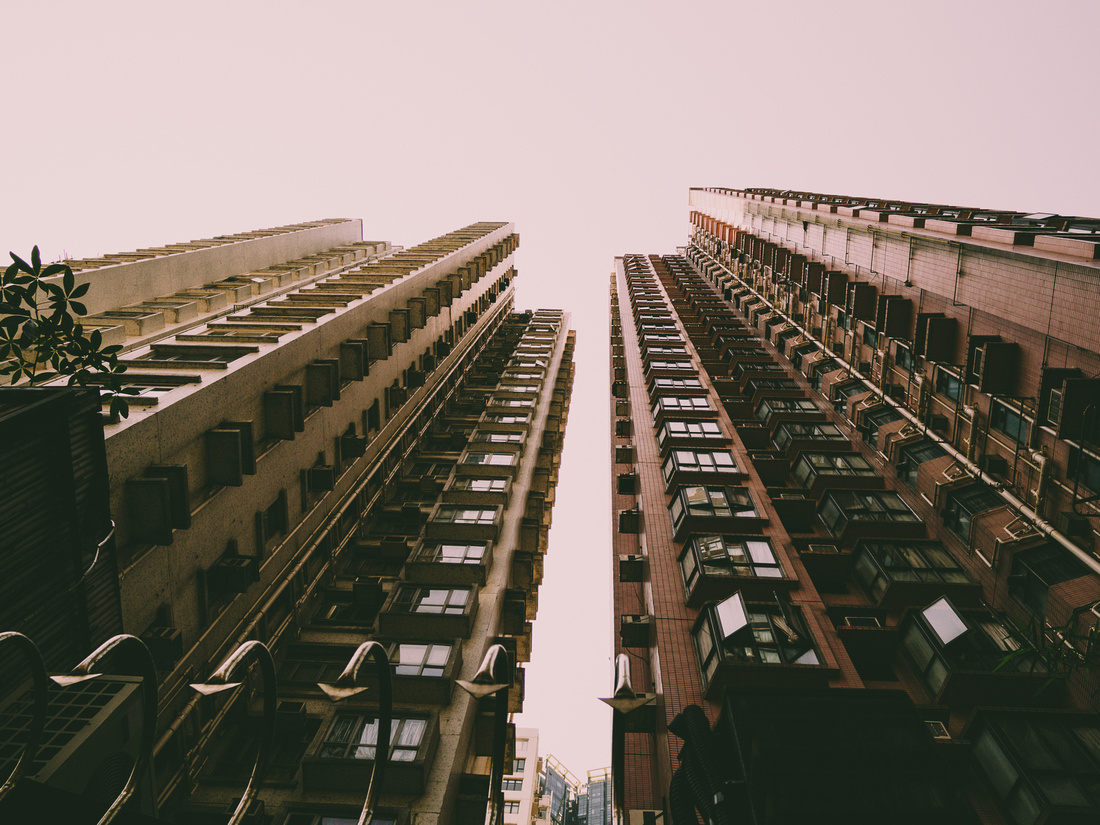 What is it about Hong Kong that makes it so photogenic?  Some will argue it's the place where East meets West, where cultures clashed and formed something totally unique.  I think it's something else. 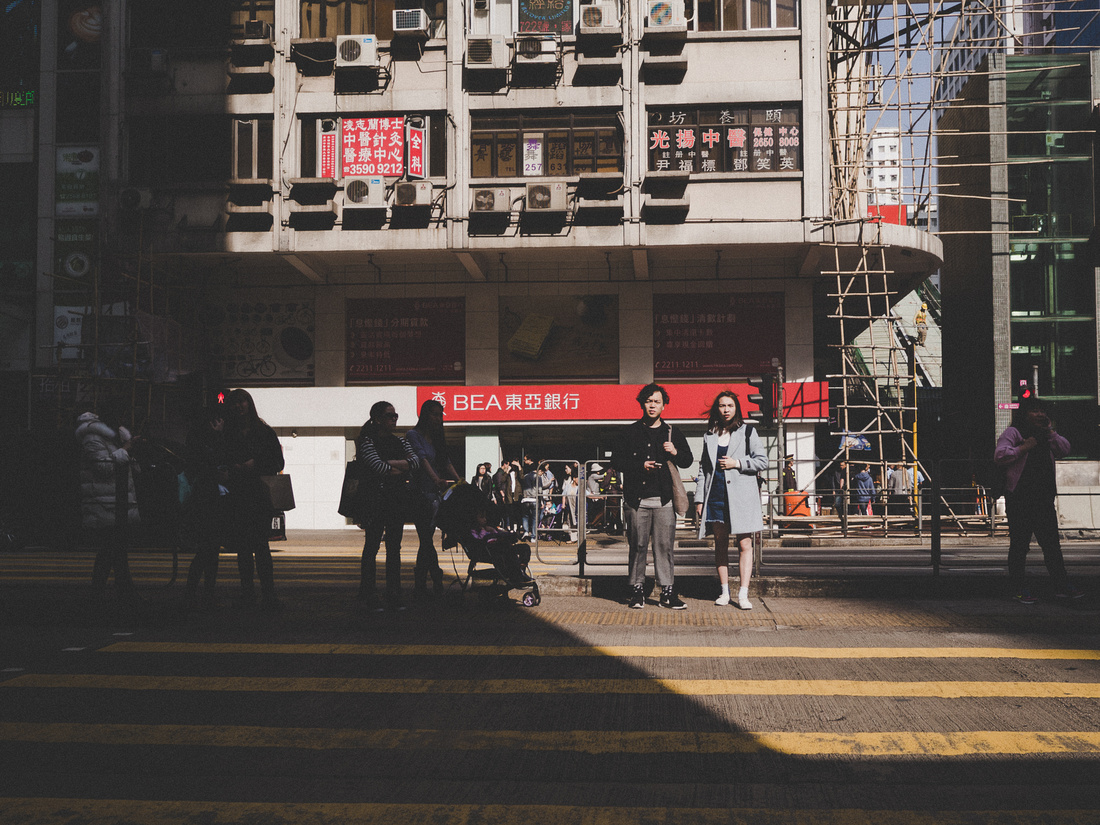 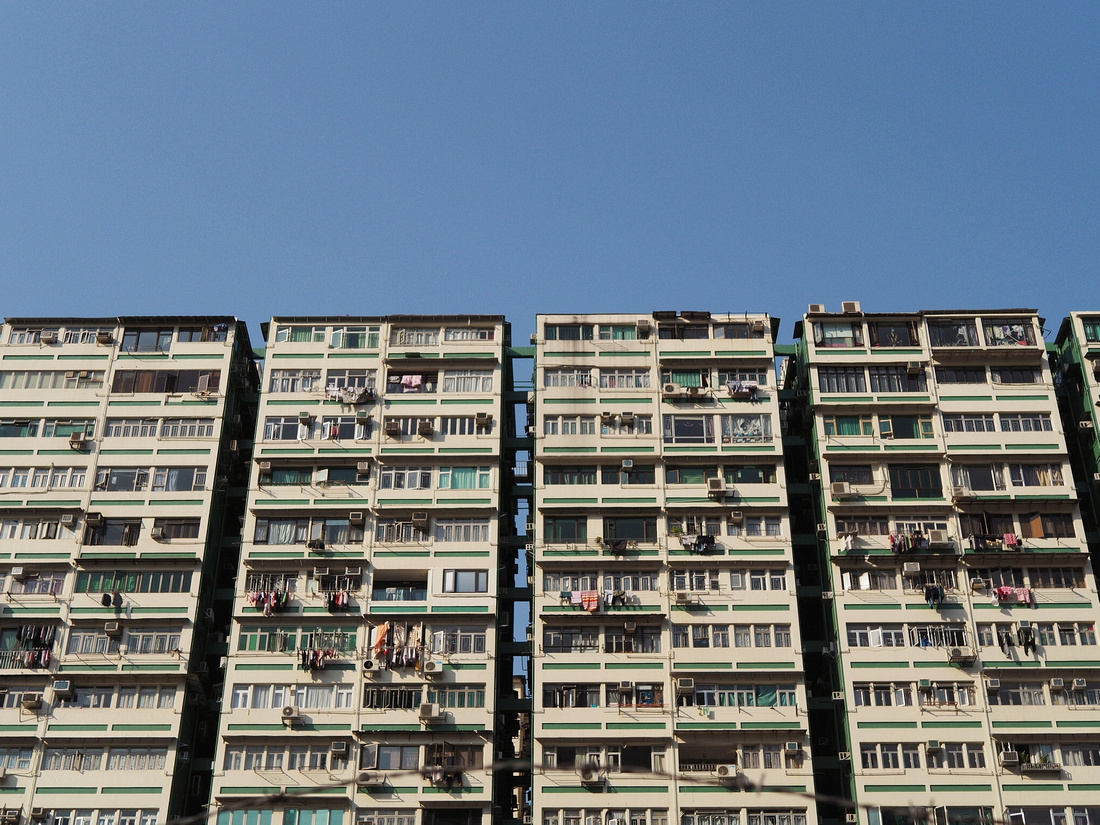 Like every major city in the world, Hong Kong is teaming with tall buildings.  Tall buildings means that at street level, day light becomes a bit of a commodity.  What more when you decide to build a port city on the side of a mountain? By virtue of its elevation changes, Central's meandering alleyways they dare call roads, you see abrupt shadows with slivers of light making its way through every man-made canyon.  I get it now, it's the light.  It's paradise for the photographer.  No wonder DigitalRev loves shooting on the streets of Hong Kong.  Another place I'll have to come back to and spend more time.

If you like what you see and would like to support my photography, please check out my zine!