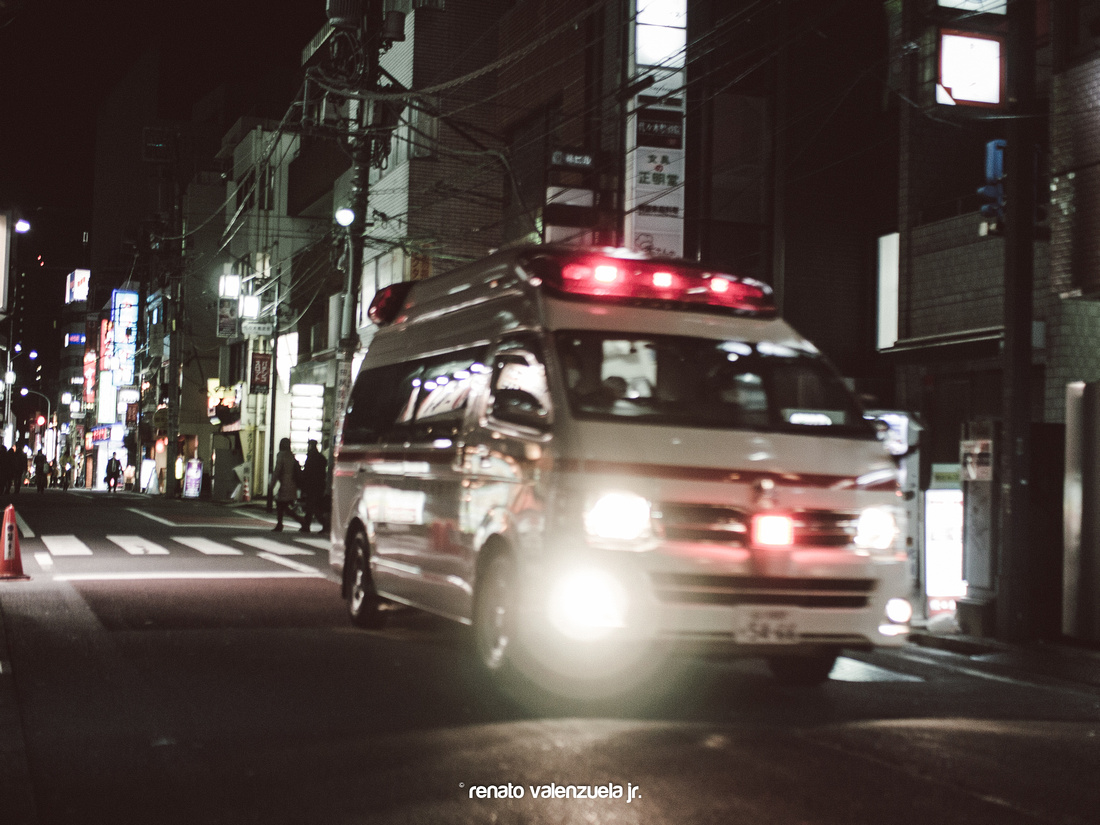 ​Tokyo.  What's there to say about Tokyo? Quite a lot.  Searching for itineraries to Manila through my favorite airline, I stumbled upon an opportunity that I could not pass up.  Usually, to get to Manila a layover in either Hong Kong, Seoul, Tapei or Tokyo is an unavoidable event.  Layovers are many different things to different people.  Some can see it as a hassle while others relish the chance. My itinerary involved a direct flight from Newark to Narita.  I've been to Narita plenty of times before, but I've been yearning to step foot outside the international transit concourse for years.  My connecting flight was in Tokyo Haneda, another airport in Japan that I've become quite familiar with after having gone back to the Philippines for 6(?!) years in a row.  So I had to go from Narita to Haneda with 18 hours in between.  This was completely intentional because not only did this itinerary cost a lot less than others, I finally had my chance to step foot on Japanese soil and venture out in to one of the biggest, busiest, most beautiful cities in the world: Tokyo.  Walk around all night in a strange city where I don't know the language.  What could possibly go wrong? 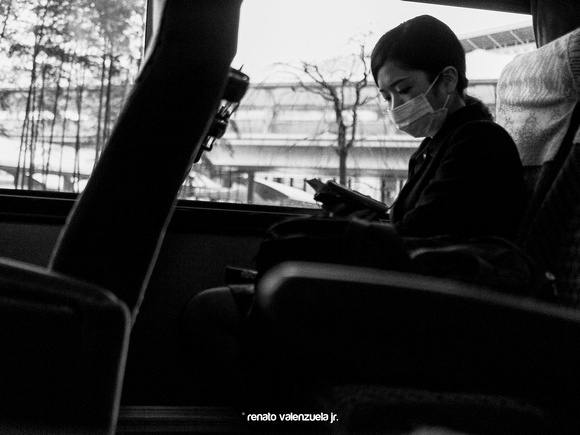 CommuterIn Japan, people wear masks not because they're afraid of getting sick. They wear masks because they are feeling under the weather and they don't want others to get sick. Considerate, no? 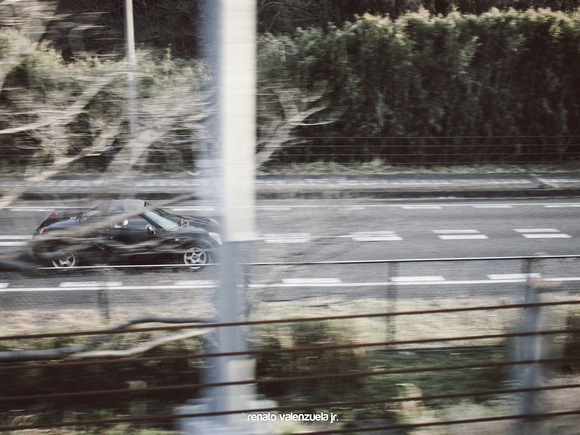 ​For the uninitiated, traveling from city to city can be a nightmare both fiscally and logistically. Fortunately, Tokyo has one of if not the best mass transit network in the world.  Trains run on time all the time.  Both major airports that serve the Tokyo metro are accommodating to a baffling degree, it makes you wonder why the rest of the world doesn't do it this way.  Getting From Narita to Haneda is actually pretty easy.  You could go the adventurous route and take the trains or you could take an airport-to-airport shuttle bus.  I opted to take the bus.  After baggage claim and customs, the counters for the buses are very easy to find in both airports.  The company I chose was Friendly Airport Limousine Bus.  I had 18 hours on the ground and I'm still young and able-bodied so I decided on not going for a hotel room that I was barely going to use.  So what was I going to do with my luggage? Haneda offers luggage storage inside the terminal and the counter is open 24 hours.  Fees vary depending on the girth of your luggage.  Simply drop them off and tell the man behind the counter when you'll be back for them and you can be on your way.  With the burden of luggage gone and having nothing to keep track of but my camera bag and bare essentials, I made my way to the monorail.  I should probably mention that since I only had 18 hours between flights, that meant realistically I only had 11 hours on the ground.  The other 6-7 are already spoken for when you take getting through customs and the commute into consideration.  I should also mention that with only 11 hours to kill and not knowing a lick of Japanese, I also thoroughly researched the shit out of what I wanted to do and how I was going to do it.  As it turns out, I could've easily winged it.  The most convenient way to get to from Haneda to Tokyo proper is via the Tokyo Monorail.  Fare is based on distance and there are even express trains to each terminal should you find yourself in a rush on the way back.  The stop to get off at is Hamamatsucho as it provides access to the JR Transit.  The Yamanote Line is the one you want.  It's basically a loop that goes around Tokyo and stops at all the major neighborhoods.  It's also the big green circle on the subway map that you'll see at every station.  Since it's also a commuter line, there are plenty of trains every couple of minutes.  The only downside is that the last train is at 1am and the first train as at 4:30am.  All trains originate out of Osaki.  Even if you don't know Japanese, Tokyo is one of the easiest cities to navigate via train.  At every station, underneath the sign of the station that tells you where you are there are also corresponding signs that tell you what the next station is and what the previous station was and even tells you which direction they are in, in English!  You can easily read them from train as well.  NEW YORK CITY TAKE NOTES. 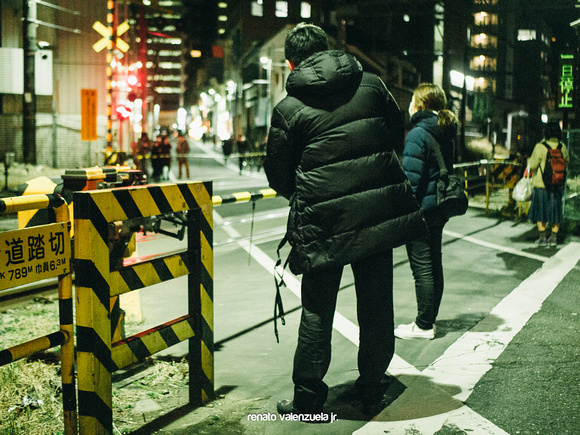 Level Crossing.At this point in the night I was just walking in the same direction as everyone else around me. It wasn't the worst of ideas. 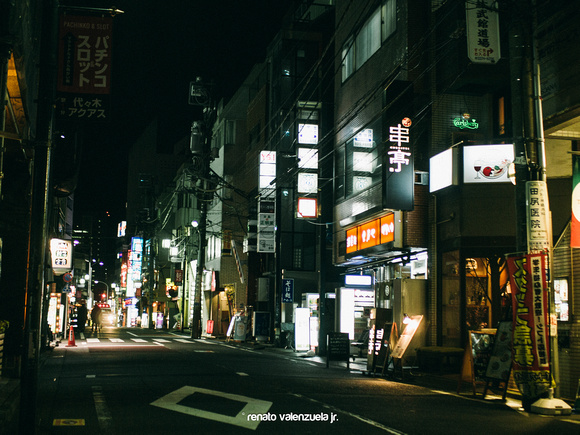 Avenues and AlleywaysWalking around aimlessly with no real destination. Somewhere between Shinjuku and Harajuku

​Since I only had 11 hours, my points of interest were limited to 3 places: Shinjuku, Harajuku and Shibuya Crossing.  I really wanted to catch the Tsukiji Fish Market but being that I was on the ground from 2:45PM to 9:30AM the next day, that would really have cut it close.  Next time.  I wanted to go to Shinjuku because it is the unofficial camera store district and I ever so desperately wanted to make it on time to at least one of the major camera stores before they had closed for the evening, but it wasn't to be.  Bummer.  It would have been like going to B&H and shedding a tear, but for different reasons.  Checking out the used inventory from the country most of the gear came from would've meant absurdly cheaper prices and a dream come true.  Maybe it was better off, because then I would've screwed myself in the Philippines.  Another stop to add to the "next time" list.  So with that off the list and having 8 hours to go, I decided to walk around with the intention of getting genuinely lost.  It almost worked too, until I had accidentally made my way to my next stop, Harajuku.  Harajuku is known for its meandering alleyways, shopping and the youths.  If SoHo were in Chinatown and full of ridiculously dressed young people, it wouldn't even come close to Harajuku.  Takeshita Street is the place to see.  It's effectively a pedestrian mall filled with shops, bars and places to eat.   Figured I'd try my luck some more with this whole walking business since it's served me surprisingly well up to this point so off to Shibuya Crossing it was.  If you didn't know by now Shibuya Crossing is that famous intersection just outside Shibuya Station that has this 5-way "scramble cross" where pedestrians literally take over the intersection and all vehicle traffic stops.  I made it to Shibuya Crossing a little bit earlier than expected and with 6 hours to go, I decided that it was time to eat.  And in typical westerner fashion, I went to the McDonald's, the one place where the language barrier wouldn't have been an issue.  Such a let down, right?  I'm pretty familiar with Japanese Cuisine and as much as I wanted to go to a place on a whim, I didn't have any one to share the meal with as I was travelling solo.  So my options were eat authentic Japanese Food in Japan at some random place with the possibility of it being crap, or go for the known quantity that I wouldn't be surprised if it were crap because fast food as fast food all over the world.  I had a Mega Mac, fries and a coke. 'MURIKAH. 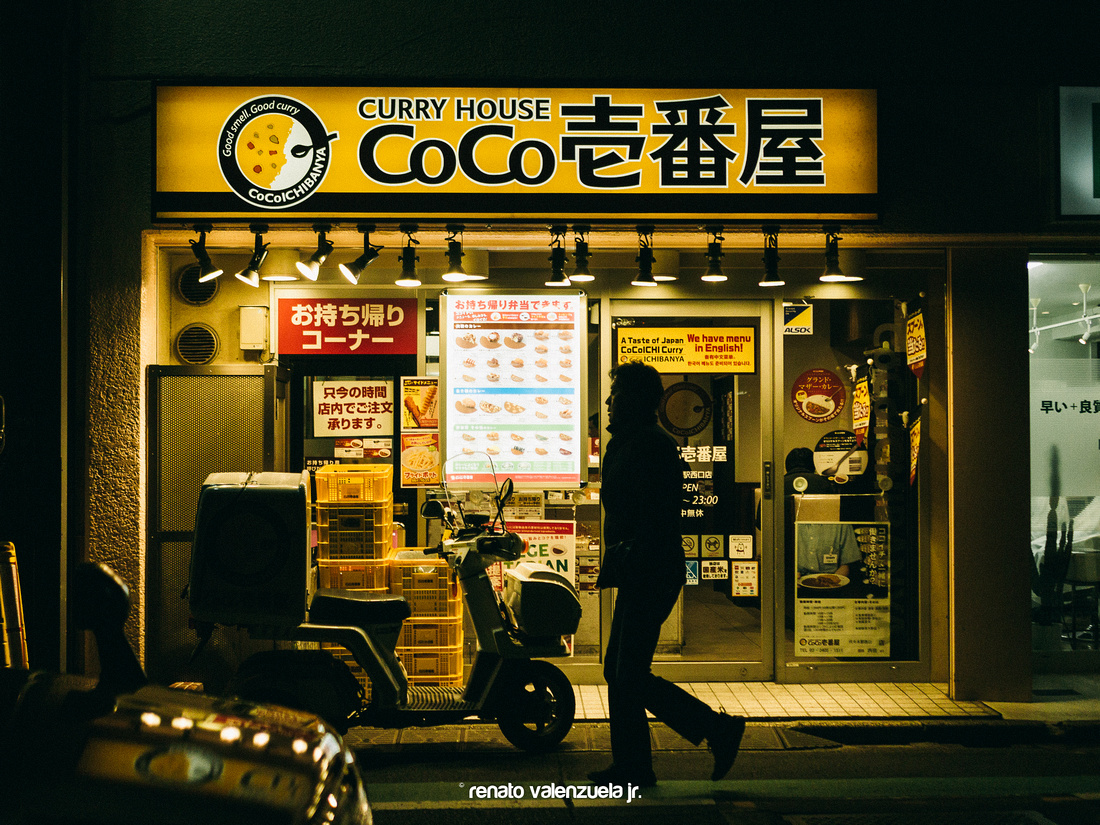 JuxtaposedSomewhere near Yoyoji Station. The scooter is what caught my attention. The man walking across the frame was merely dumb luck. Timing his position in the frame though, was not. 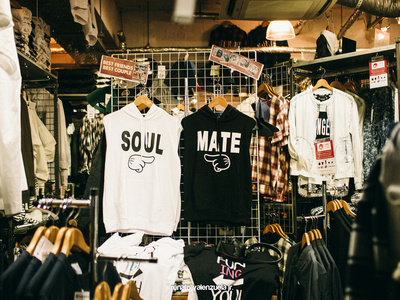 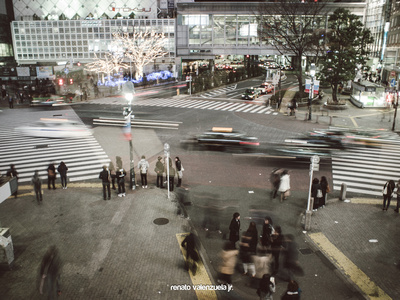 Shibuya CrossingNot filled up. This was much after the last train of the night 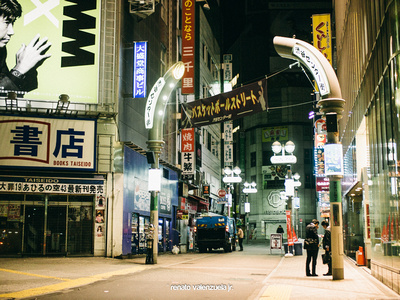 Entertainment CityWalk down any alley in Shibuya and don't be surprised if you get propositioned. 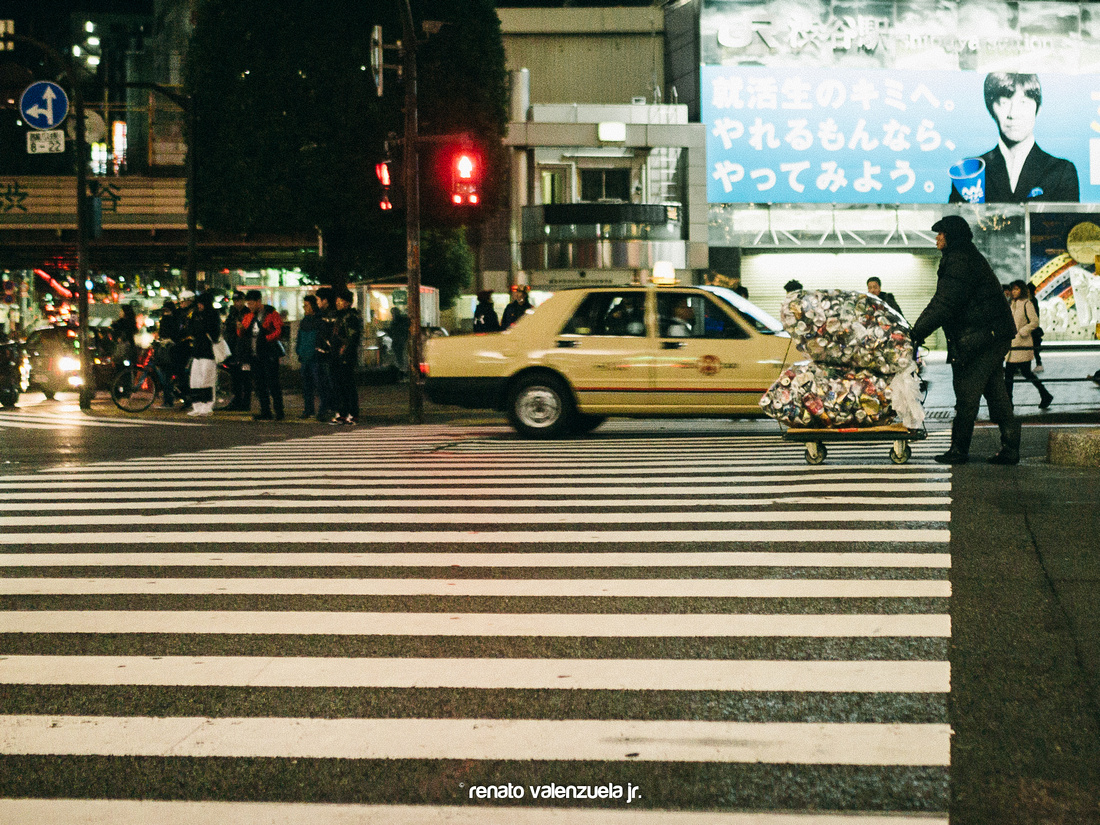 ​So far, this is seeming like such a fail.  I missed out on window-shopping in Shinjuku.  I didn't get to take a photo of the infamous scramble crossing of Shibuya AND I had McDonald's for dinner.  Tired and dejected, I decided to sit in the Starbucks to write some notes.  The very same notes that make this blog entry.  After a double shot of espresso and a tall Flat White, I was both refreshed and restless.  I had a new game plan.  With 2 and a half hours to go before the first train out of Shibuya were to leave, I went for another walk.  It was near freezing, I could see my breathe but at this time of the night, I noticed something.  All of Tokyo had finally gone to sleep.  It was like a ghost town.  In fairness, every city shuts down at night.  Even the busiest of the busy.  I don't know why I was so dumbfounded at the sight.  I suppose it's because I live just outside New York.  Even at 4 in the morning there are people still out and about but not in Tokyo.  The city literally shuts down for about an hour.  People are off the streets by 3 and make their way back out at 4.  There's no rest for the wicked.  My new plan was to document the emptiness of it all.  A city teaming with millions of people, completely desolate.  There wasn't much else to do at this point, the first train out of Shibuya didn't leave til 4:30, the first monorail back to Haneda not until 5, so I might as well. 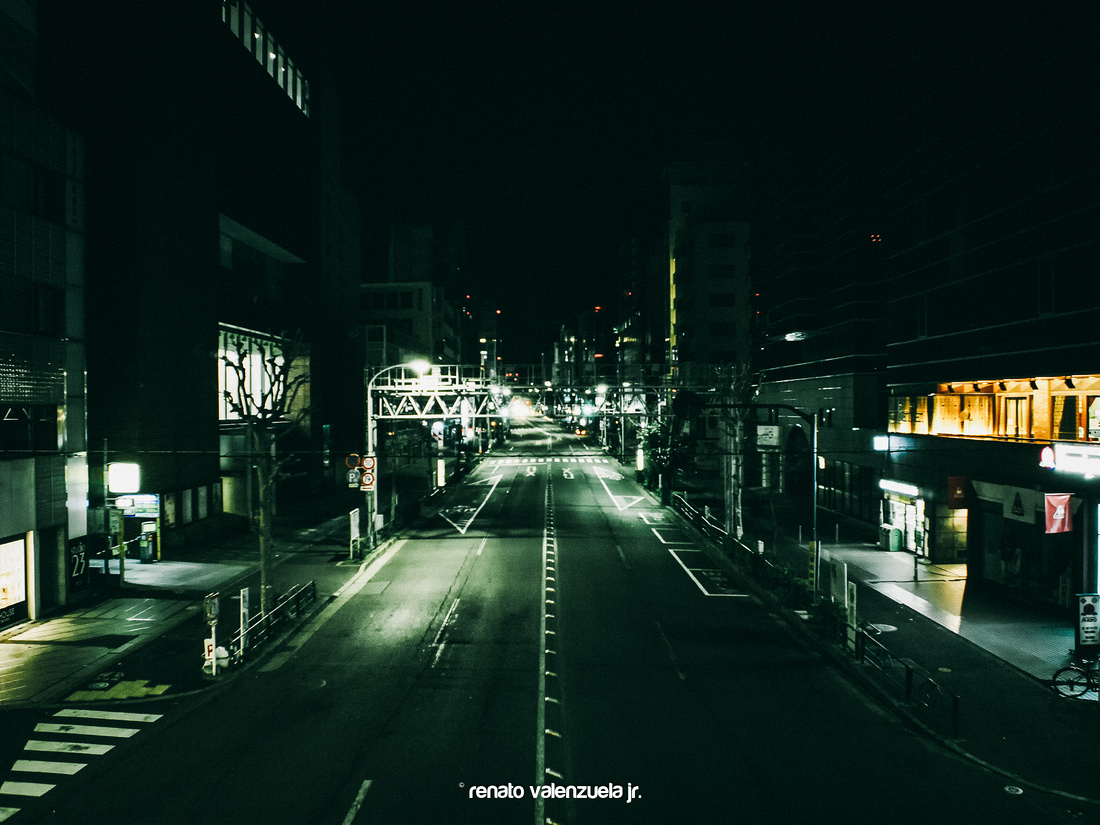 Meiji-DoriNot a soul in sight. 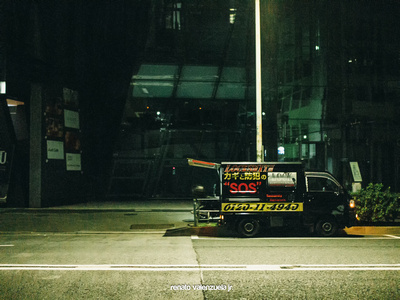 Sendin' out an...this appeared to have been some kind of 24/7 Roadside assistance for scooters. 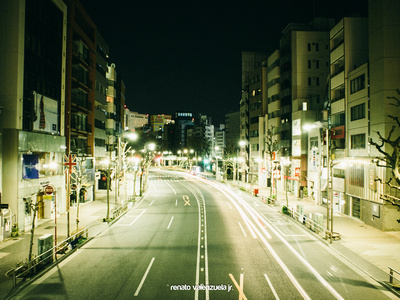 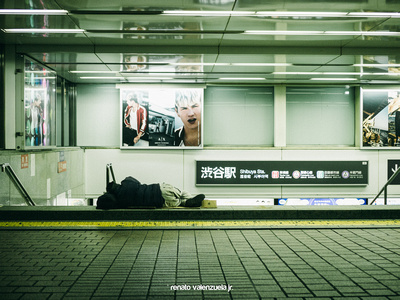 First in LineNo, he's not homeless. 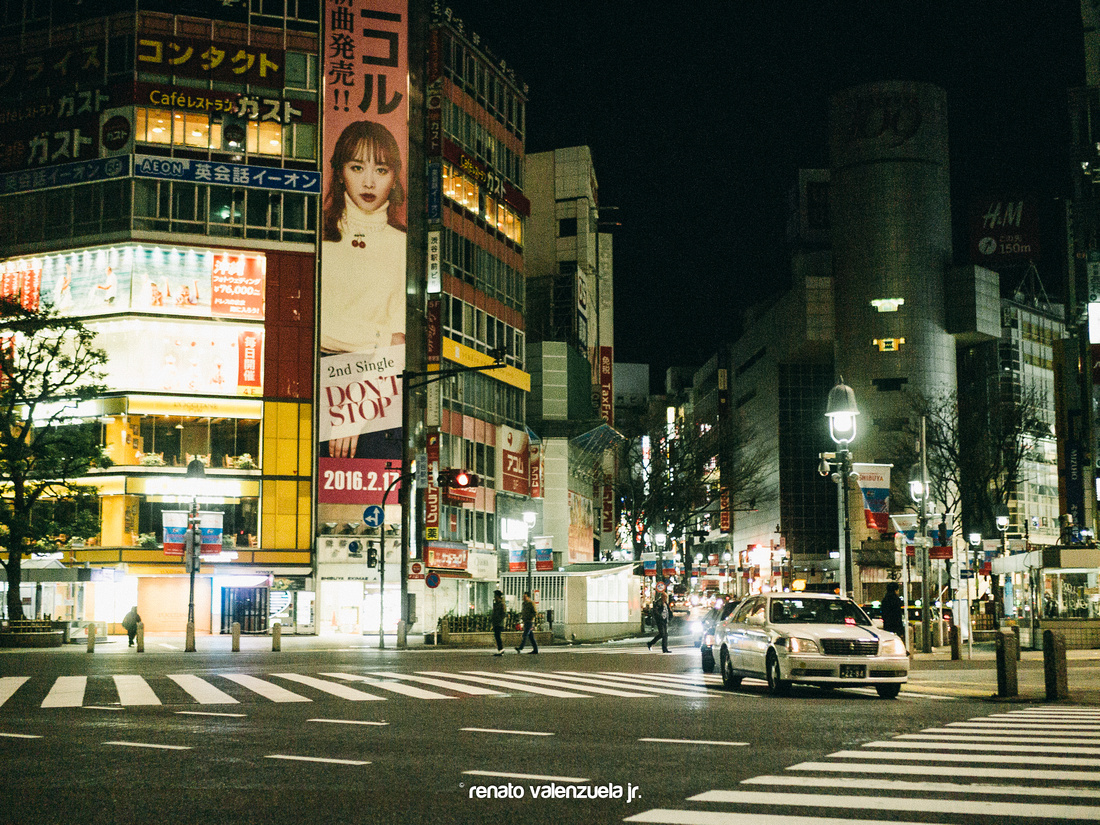 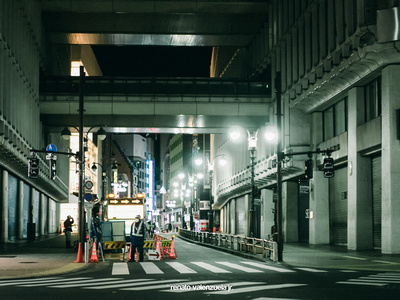 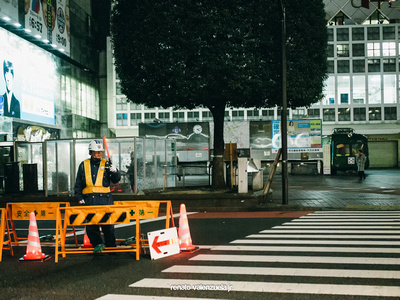 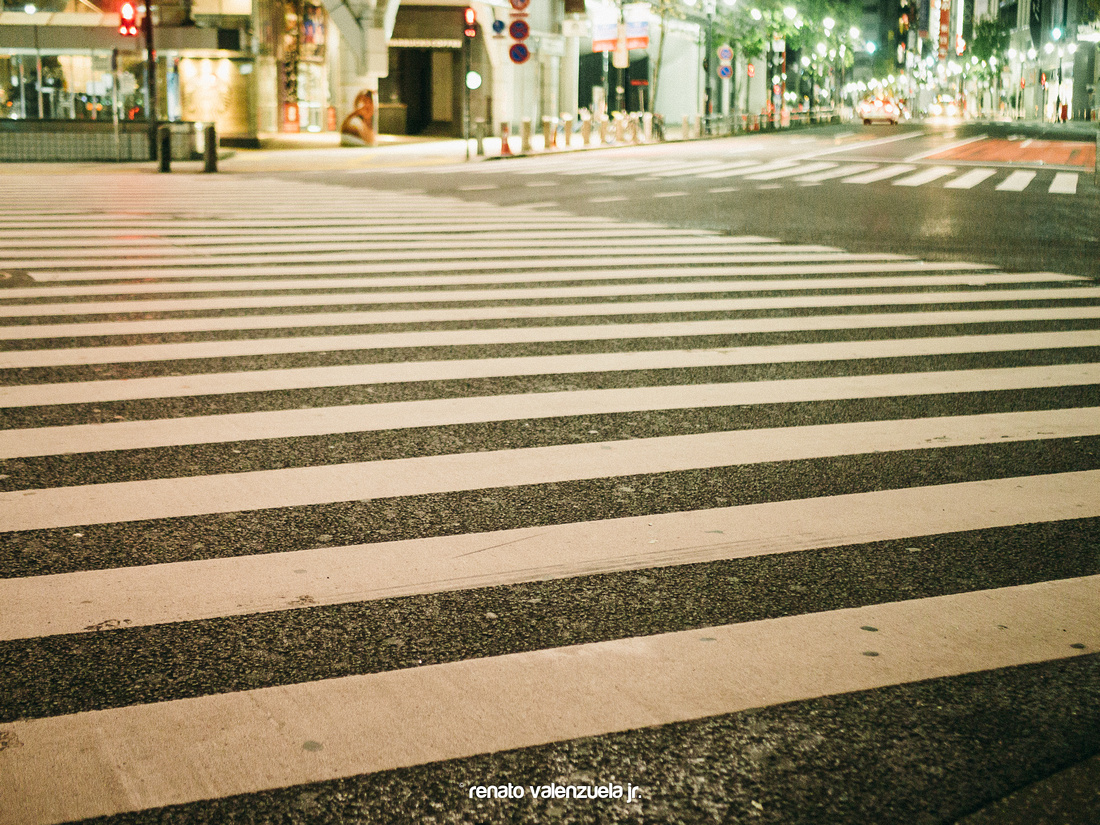 As I was walking back up Meji-Dori towards Shibuya, the hustle and bustle was starting up again ever so slowly.  Salary men were coming out of the woodwork, whether they were early-birds on their way to work or unlucky souls who missed out on the last train I couldn't tell, but I soon realized that  I wasn't in some fantasy land.  I was in a place where people live and work.  It isn't as though it's something I've never seen, but I've attained a new appreciation for all the different yet similar ways we all do things wherever we are in the world. 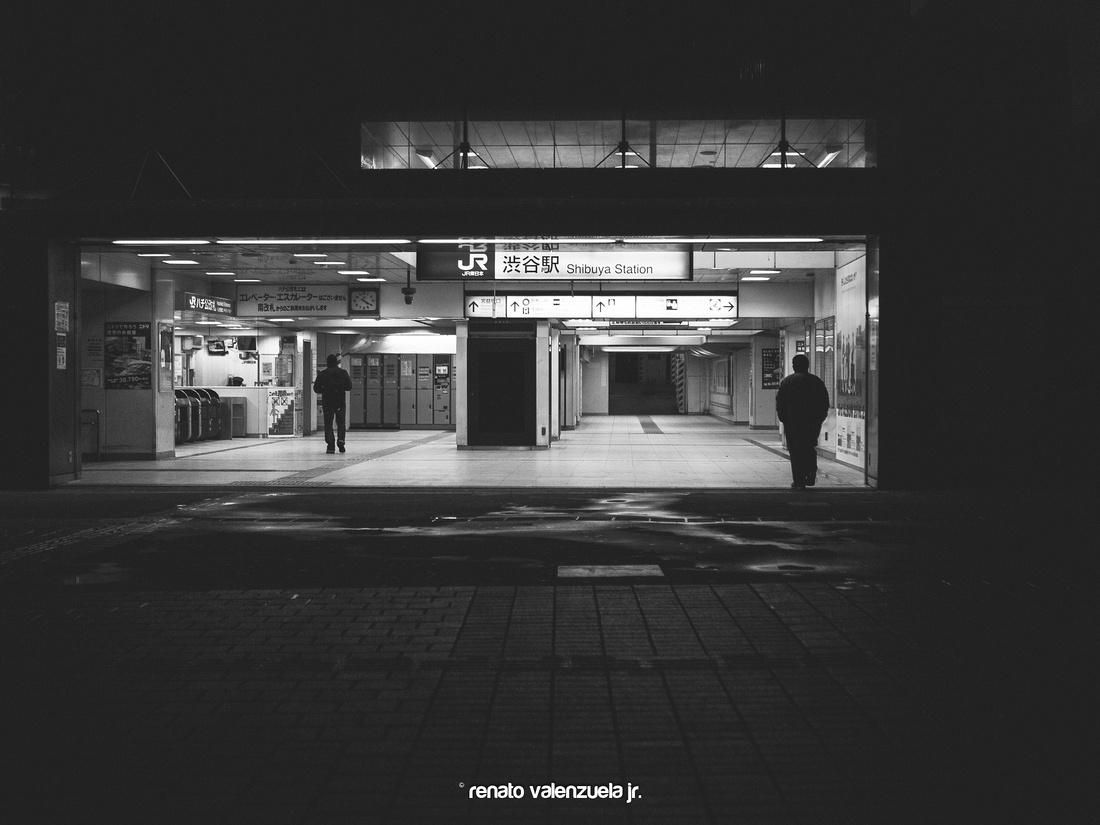 When I made it back to Haneda and after having my breakfast, (Katsu Curry if you were wondering) I realized there was no way that I wasn't coming back to this place.  Not a chance.  It even gave me other layover ideas.  Taipei, Hong Kong, Seoul: You're all next.  But not before I come back to Tokyo.